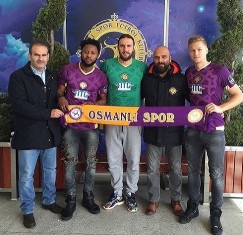 Raheem Lawal has revealed that he celebrated his maiden goal for Osmanlıspor in a 3-1 win against his former club Mersin İdmanyurdu in the Turkish Super Lig on Sunday afternoon.

The Super Eagles midfielder made sure Osmanlıspor got the maximum points with the team’s third goal in the 90th minute and made a shut up gesture to the away supporters after his strike.

“The goal is dedicated to my kids - Jumai, Bryan and Tiwa. I am happy with my present team,” Raheem Lawal told allnigeriasoccer.com.

“Of course I celebrated when I scored. I told them to shut up.”

Raheem Lawal , 25, starred for Mersin İdmanyurdu for a year, and scored 5 goals in 26 appearances before he shifted to Eskiåÿehirspor.