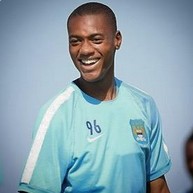 Tosin Adarabioyo, 18,  has reflected on Manchester City’s 5-1 loss to Chelsea in the Emirates FA Cup on Sunday.

The England youth international was among the five full debutants in the Citizens ranks that got their first taste of first-team action at Stamford Bridge and was named Man of the Match after his impressive display.

“Proud moment for me to make my debut today but a very disappointing result ,” Tosin Adarabioyo posted on Twitter on Sunday night.

Born in Manchester, Adarabioyo made City’s 18-man squad for the Champions League games against Juventus and Borussia Mönchengladbach but did not come off the bench in both fixtures.

In the first half versus Chelsea, he made four clearances, more than any other player on the pitch, and blocked two shots.