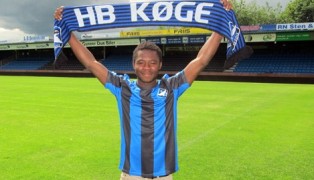 Dream Team VI trainee Jide Owolabi has tipped his former team, FC Midtjylland to stun Manchester United at Old Trafford and progress to the next round of the Europa League.

United host the Danish side at Old Trafford on Thursday in their return leg, round of 32 fixture, already trailing 2-1 from the first leg and Owolabi believes his former side will get the better of the English giants.

He says: “Midtjylland did so well to win in the first leg against Manchester United and it’s a going to be a very good game on Thursday.

“But I think my former teammates will do well enough to win at Old Trafford because they have been doing so well and I have confidence they can stun United in their own backyard.”

The 20-year old, who currently plays for Nyokobing, also spoke about the Nigerians at the club, and said he believes they will keep doing well, following Paul Onuachu’s winner in the first leg.

“The Nigerians there have been doing so well and I am very proud of them and I know they will continue doing well to help their team progress,” he stated.

Owolabi and his Nyokobing teammates have been training since early February, ahead of the restart of the Danish league next month.