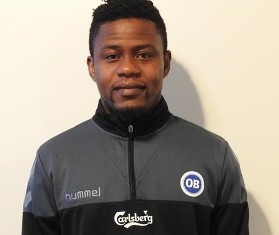 Izunna Uzochukwu is almost certain to make his official debut for Danish side OB Odense on Friday evening against AGF in the Superliga.

For the tie at TRE-FOR Park, the Nigeria international has been named in the provisional 19-man squad announced by manager Kent Nielsen on Thursday.

The defensive midfielder scored in his first game for OB - a friendly against HB Koge on January 29 - few days after his transfer was completed.

At the end of the first stanza of the Superliga, OB Odense occupied the seventh position with 24 points garnered from 18 games.