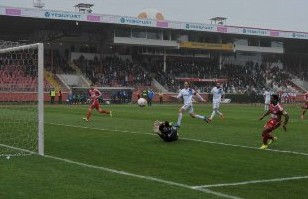 The homers were quickly out of the blocks after the intermission, scoring through Ekigho Ehiosun in the 47th minute before Ofoedu notched a brace to seal the win.

The former Enugu Rangers star put the Red Lightning 2-0 up in the 49th minute, then put the game beyond the visitors with his second of the afternoon in the 63rd minute.

Chikeluba Ofoedu has been showing off his accuracy in front of goal in recent games, netting five goals in his last six matches in the league, whereas he experienced a dry spell for four months - August 29 to December 25,2015.