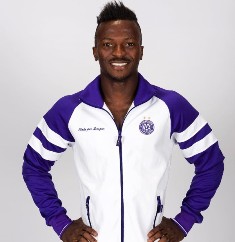 Michael Babatunde notched his second goal in the colours of Raja Casablanca on Sunday, helping the Greens in their 4-0 rout of Mouloudia Oujda on match day 18.

On 39 minutes, the Super Eagles star dribbled past two defenders and was about to shoot but was brought down in the penalty area. Youssef Kaddioui made no mistake from the spot to put Raja 2-0 up.

Seven minutes out of intermission, Michael Babatunde tapped home from close range from a floated free kick from the right flank.

Over to  the Austrian Bundesliga, Olarenwaju Kayode scored what turned out to be a consolation as Austria Vienna suffered a 4-1 defeat at the hands of Salzburg.

With nine goals to his name, the ex-Flying Eagles star is the fourth top scorer in the league after 24 rounds.