Exclusive - Kelechi Nwakali : I Have Signed A Five - Year Contract With Arsenal 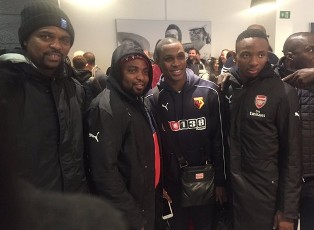 Nigeria U17 international Kelechi Nwakali is delighted to confirm that he has appended his signature to a five-year contract with English Premier League side Arsenal, bringing an end to transfer speculation surrounding his future.

The ASJ/Diamond Academy star was on the wishlist of Manchester City, Chelsea and West Ham after displaying his wares at the Fifa Under 17 World Cup and was presented with the Golden Ball after the tourney in Chile.

“I just came back from London, I have signed a five-year contract with Arsenal, ” Kelechi Nwakali told allnigeriasoccer.com on Wednesday morning after training with his nursery team.

“So many teams were interested in me but it has been my dream at a tender age to play for Arsenal.”

Kelechi Nwakali’s nursery teams will get above two million pounds as transfer fees from Arsenal for shredding their agreement with the central midfielder.

Prior to agreeing terms with the Gunners, his reps rejected overtures from Sporting Lisbon, Olympiakos and Udinese.