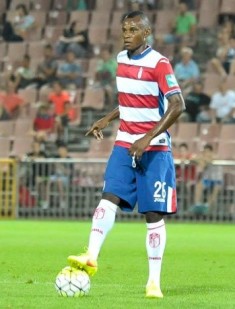 Former Nigeria U20 international Uche Agbo’s goal ensured Granada II claimed their eleventh win of the season in the Segunda B on Friday night against Real Jaén.

The central midfielder popped up with the winner in the 21st minute of the contest at Estadio Nuevo Los Cármenes.

The Enyimba product has seen his first team opportunities limited for the first team of Granada since the start of 2016 and was sent to the reserve team to enable him get some game time under his belt.

Of the 31 games Agbo has played for the Granada teams this season, only ten matches were for the main team.

The 20-year-old is tied to the Andalusian outfit until the summer of 2018.