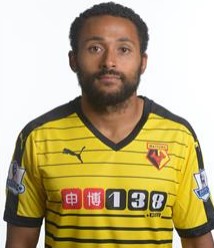 Watford’s Anglo-Nigerian wing-back Ikechi Anya is hopeful that the Hornets will see off Arsenal when both teams square off on Sunday afternoon in the quarterfinals of the Emirates FA Cup.

Watford were resoundly thumped 3-0 by the Gunners in the last contest between the two Premier League sides at the Vic on October 17 in game week nine, with Anya and Odion Ighalo both in action.

The Scotland international reckons that the scoreline did not tell the full story of the game and believes that Watford will turn the table on Arsenal and qualify for the semifinal of the FA Cup at Wembley.

“We knew at the start of the week it was either Arsenal or Hull,” Anya said to Hornets PlayerHD.

“We’re excited, the gaffer has spoke to us, we all know our positions, so we’re going to go there and hopefully get the win.

“We’re all ready, there’s no excuses, they’re a tough team but if we play to the best of our best abilities we can get a result there.”

Glasgow-born Anya has been involved in every single game contested by Watford in the FA Cup this season, starting the fourth round tie against Nottingham Forest while he came off the bench against Newcastle United and Leeds United.