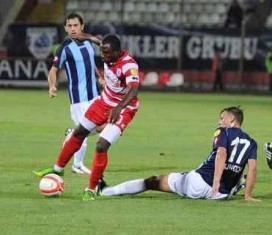 Umar Aminu belatedly celebrated his call-up to the Super Eagles by notching a brace in Osmanlispor FK’s 3-2 away win against Istanbul Basaksehir in the Turkish Super Lig on Saturday afternoon.

The homers broke the deadlock in the seventh minute before Osmanlispor found a way back to parity through Aminu in the 21st minute.

In the 37th minute, the ex-Flying Eagles star put the visitors 2-1 up before notching a helper in the last goal scored by Papa N’Diaye six minutes before time.

Aminu’s brace against Istanbul Basaksehir took his Super Lig tally for this season to five goals(four assists), having found the net against Galatasaray and Bursaspor.

Osmanlispor FK, who face GençlerbirliĂ„źi next weekend, are eighth on the table after 25 rounds.