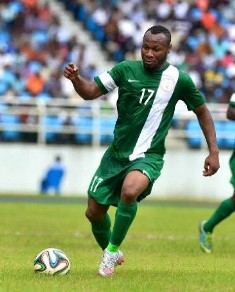 Sylvester Igboun has explained that he sustained an injury during the Russian Cup tie between Ufa and CSKA Moscow on March 1, which has kept him on the sidelines for about two weeks.

The Super Eagles frontman was not in Ufa’s squad for league games against Mordovia(March 6) and Lokomotiv Moscow(March 13) because of the ailment.

“The reason why I have not been playing for the last two games is because I had and injury from the game we played against CSKA Moscow in the Cup.

“It is an injury under my leg but I am getting better now and will join the team this week,” said Igboun to allnigeriasoccer.com.

Sly Igboun has not been summoned for the African Cup of Nations qualifiers against Egypt, having featured in every single game played by the Super Eagles under former coach Sunday Oliseh.