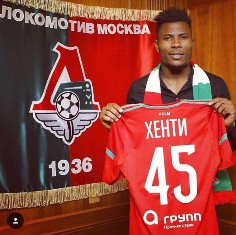 Henty Ezekiel,22, believes Lokomotiv Moscow will win the Russian Premier League title at the end of this season.

After 21 games played in the division, Lokomotiv Moscow are six points behind leaders Rostov, who have played a game more, but the Nigerian is confident the Railwaymen can close the gap.

“I like the style of play of Locomotiv. I can see that now the team is in good shape. We play football fast enough, we are able to score at the right time,” Ezekiel told Lokomotiv Moscow’s official webpage.

“I believe, Loco can become a champion. My game is difficult to predict, but I work hard, I try to improve every day.”

The AC Milan product penned a multi-year contract with the capital team in February, ending his association with Slovenian side NK Olimpija Ljubljana and he has been well received by everyone at the club.

“Problems of adaptation was not there - I was well received, all the guys are very open and friendly. The transfer to Lokomotiv was a conscious and deliberate choice. You could even say that the results exceeded expectations,” he added.

Ezekiel could play his fourth game for Lokomotiv Moscow when they tackle Rubin Kazan on Sunday afternoon.