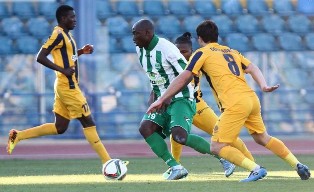 Aris Limassol striker Mathew Boniface was elated after scoring a stoppage-time equalizer for his team in their 2-2 draw with Ethnikos Achnas on Sunday afternoon.

At the end of the Cypriot First Division match at Tsirion Athlítiko Kentro (Limassol), it was hard to call who won the individual contest between Boniface and ex-Flying Eagles defender Ganiu Ogungbe, who found the net for the visitors in the first half.

“I am very happy to score the last goal because that very goal kept us alive in the playoff that we are involved in now, ” Boniface told allnigeriasoccer.com.

“We are now nine points ahead of Ganiu Ogungbe’s team. Ganiu is a very good defender, he is strong and powerful.”

Boniface, 21, has contractual obligations with Aris Limassol until the end of the 2016-17 campaign.