Subscribe
Ohi Omoijuanfo Hoping To Score More After Getting Off The Mark For Stabaek
Published: April 03, 2016 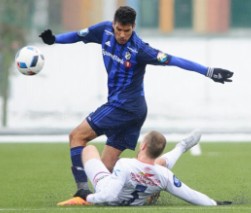 Ohi Omoijuanfo was pleased to score his first goal for Stabæk in their 3-1 loss suffered at the hands of Bodø / Glimt in the Norwegian Tippeligaen on Sunday.

The former Norway youth international penned a three-year contract with Stabæk in the January transfer window, and had racked up 265 minutes of game time in total before finding the net at the Aspmyra Stadion.

“I finally opened my account, so I am just hoping that I will be blessed with more goals. I always put pressure on myself, if I don’t score, then I’m not happy,” says Omoijuanfo to allnigeriasoccer.com.

Though Stabæk have lost their first three games in the top-flight, their number 99 has noted that the team has been playing well and will work on its deficiencies.

“We have lost so many scoring opportunities, so we have to work on that.”

Omoijuanfo ended the 2015 season as the top scorer for Jerv, with 16 goals in 31 appearances in the Norwegian First Division.