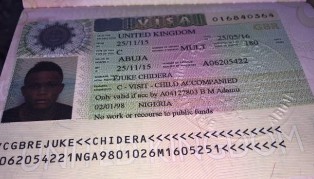 Liverpool will loan out Nigerian talents Chidera Ejike and Jacob Njoku to Belgian Pro League team Sint Truidense VV if they convince the coaching staff of their qualities during trials.

The offensive minded players are scheduled to travel to Anfield in April to be shown around the club’s facilities but there is no  response yet from the Belgian embassy here in Nigeria as regards to their visa applications.

“Liverpool will have to loan them out to Sint Truidense VV because they don’t qualify for a work permit. Immediately they get their Belgian visas, they will move straight to the United Kingdom,” said agent Babawo Mohammed to allnigeriasoccer.com.

“They already have their United Kingdom visas, so we are waiting to hear from the Belgian embassy because they won’t return to Nigeria if they succeed in the trials.

“Until after the trials before we know if Liverpool will pay a transfer fee or training compensation.”

The 18-year-old Ejike was heavily linked with a move to Manchester City last year but the deal fell through.