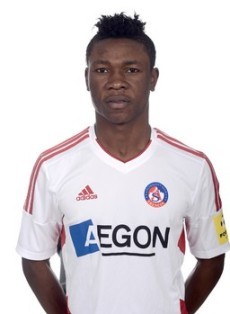 Samuel Kalu scored his first professional goal as AS Trencin thrashed Ruzomberok 5-1 in the Slovnaft Cup on Wednesday.

The winger opened the floodgates as early as the third minute at the Mestský futbalový štadión Na Sihoti when he found himself alone in the box as a result of poor defending by the opponents before firing past Tofiloski.

With AS Trencin 5-1 up, Kalu had an opportunity to score his second of the game in the 85th minute but was blocked by a defender.

Gino van Kessel netted a hat-trick for the Slovak Super Liga pacesetters while Stefan Zosak scored what turned out to be consolation for Ruzomberok just after the hour mark.

A product of Golden Boot Soccer Academy, Samuel Kalu penned a two-year contract with AS Trencin in December 2015.