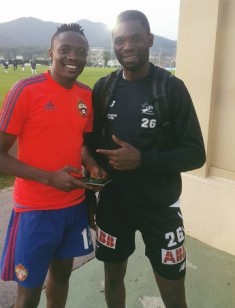 Ahmed Musa was amongst the scorers as CSKA Moscow thrashed Mordovya 7-1 on game week 23 in the Russian Premier League on Saturday.

Goals from Igor Shitov(OG), Roman Eremenko and Aleksandr Golovin effectively ended the game as a contest before Musa heaped more misery on the opponents with his tenth league goal in the 25th minute.

The Nigeria international was credited with two assists for the goals netted by Eremenko and Dzagoev in the 76th and 78th minute respectively.

Guangzhou R&F loanee Aaron Samuel made his fourth appearance for CSKA Moscow, albeit off the bench, when he replaced
Zoran Tosic in the 57th minute.

The Army Men have accumulated 46 points from 23 matches and lead the standings in the top-flight, ahead of Rostov who have a point less from the same number of games.