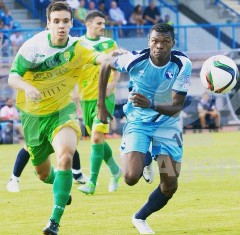 NK Olimpija Ljubljana forward Blessing Eleke has saved his coach Marko Nikolic from being fired by president Milan Mandaric despite making racist comments during the game against Zavrc on Sunday, April 10.

The manager overreacted after the Nigerian netted a stoppage time equalizer and over-celebrated instead of allowing the other team resume play.

“His coach said something during the game, he didn’t hear anything that was said until after the game when it was put on the internet in Slovenia that he said something bad,” a source close to the player told allnigeriasoccer.com.

“He told them he didn’t know about it, they wanted to send the coach away because of it. The president called him and he told him the coach did not mean what he said and there’s nothing to worry about.

“Blessing has never had a problem with the coach even for one day since he joined the club. Everything is now settled.”

The Flying Sport Academy product has netted 14 goals in the Slovenian PrvaLiga in the ongoing season.