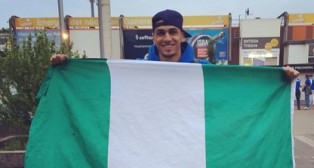 Mainz 05 stopper Leon Balogun was not happy with the outcome of the meeting between his team and Cologne in the German Bundesliga on game week 30.

And the Super Eagles star has every right to be disappointed with the way the game panned out in the end, with the Carnival Club throwing away a two goal lead to lose 3-2 in front of their supporters at the Coface Arena,  Rheinland-Pfalz.

Forty nine minutes into the contest, Balogun put Mainz 05 2-0 up when he headed home a free kick taken by Daniel Brosinski; his first goal in the colours of Mainz since his arrival from Darmstadt 98.

“Can’t even remember the last time I’ve been that disappointed.., ” Leon Balogun tweeted after the game.

Of his 20 appearances in the Bundesliga this term, he was named in the starting XI 16 times and yellow-carded on four occasions.