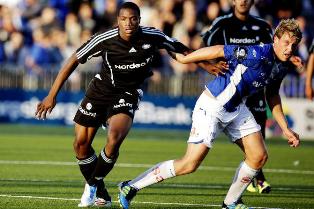 Zenit St Petersburg beat Amkar Perm on penalties to progress to the final of the Russian Cup on Wednesday evening.

The Russian-Nigerian defender Brian Idowu gave Amkar Perm the lead in the 19th minute but both teams were level at half-time, with Javi Garcia equalizing for Zenit in the 41st minute.

The two teams could not be separated after 120 minutes of football, so the winner of the contest had to be decided via a shoot-out which was won 4-3 by Zenit.

Three Nigerians Ogude, Idowu and Chuma Anene started the game against Zenit, with the first two lasting the distance while the former Norway youth international subbed out in the 68th minute.

In the final, Zenit St. Petersburg will face the winner of the second semifinal between CSKA Moscow and FC Krasnodar.