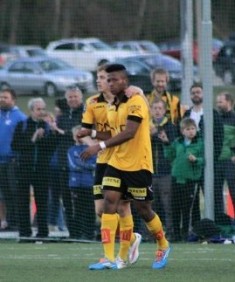 Fred Friday is four games away from equaling a long-standing record in the Norwegian top-flight after he scored for the seventh consecutive game as Lillestrom lost 3-1 to Stroemsgodset at the Marienlyst Stadion on Saturday.

Ex-Lyn Oslo striker Ole Stavrum holds the record for longest scoring streak in Norway after finding the net in eleven consecutive matches in 1966 and 1967.

Friday equalized for LSK in the 48th minute after Tokmac Chol Nguen had given the home team the lead, but two goals in the second half condemned the Canaries to their second defeat of the season.

The 20-year-old registered his first goal of the season against Molde before notching in his next six games against Sarpsborg, Haugesund, Aalesund, Odd Grenland, Valerenga and Strømsgodset.

He is being monitored by a number of teams in Europe ahead of the summer transfer market but no bid has been received yet.