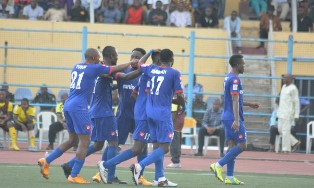 Rivers United ‘pin up boy’, Bernard Ovoke insists “nothing has been achieved” by United thus far this season.

The Port Harcourt club have recorded victories over Enyimba, Kano Pillars, Enugu Rangers and a stunning road victory over Warri Wolves but Ovoke says his teammates must keep their feet firmly on the ground.

“The day we start thinking we have arrived is the day we will start failing.

“I know we have recorded important wins in the past but there is still a long way to go this season,” Ovoke said.

The former Bayelsa United winger had scored three times in two games before Wednesday’s win over Wikki Tourists (a game in which he provided the assist for the game’s only goal).

He says his failure to score against the Tourists at the Yakubu Gown Stadium has not knocked the winds off his sails.

“I did not score but I was very satisfied with my performance.

“I will score in Umuahia (against Abia Warriors) and I know Rivers United will not lose there,” he said.

United next travel to Umuahia to face Abia Warriors in match day 17 of the competition.