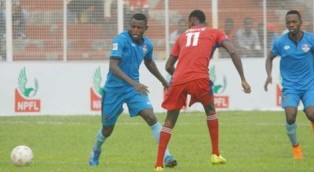 Mountain of Fire and Miracles Ministries Football Club of Lagos utility player, Bashiru Monsuru has stated that the game against Niger Tornadoes Football Club of Minna is a must win in other to make progress in Sunday’s Nigeria Professional Football League (NPFL) clash.

The Olukoya Boys will host fellow NPFL newcomers in match day 17 of the top-flight which will take place at the Agege Township Stadium this weekend.

Niger Tornadoes FC are yet to pick a point in their last five away matches as they have only managed to score two goals.

MFM FC on the other hand have not tasted home defeat this season and Bashiru believes his teammates will do everything possible to keep their record intact with the three points in their kitty after Sunday’s encounter.

“We must win the match and I feel it’s going to be an easy one for us because Niger Tornadoes are not that fantastic on the road this season.

“We don’t like the fact that we drew our last match, by the special grace of God we will defeat them.

“Respect must be given to them but if you check our home record this season you will see that we have not lost any match. We drew three matches against the top teams though they were games that we should have won.

“I strongly believe that we will keep our home record and come out in flying colours on Sunday”, the utility defender told mountaintopfc.com.