...the complete Nigerian football portal
Subscribe
Mountain of Fire And Miracles Claim Seventh Win Of The Season
Published: May 17, 2016 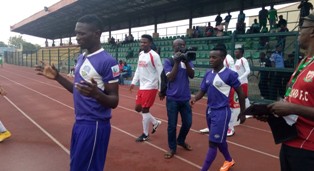 Mountain of Fire and Miracles Ministries Football Club of Lagos claimed its 7th victory of the season after a 2-0 win over Niger Tornadoes Football Club of Minna in match day 17 encounter of the Nigeria Professional Football League (NPFL) played at the Agege Township Stadium on Monday morning.

The visitors defender, Abiodun Adebayo scored the first goal of the game in the 27th minute of the match when he turned the ball into his net after an untimely pass that left Tornadoes goalkeeper, Onoreige Nobas helpless.

Odey had a chance to double the lead but he missed a glorious opportunity to increase the tally for his team.

MFM FC continued their impressive display which paid off in the final minute of the added time when Odey doubled the lead with a fine tap in off a left-footed low cross from Sikiru Olatunbosun ; his sixth goal of the season.

Tornadoes came out strong in the second half and controlled the match but coach Fidelis Ilechukwu’s defence lead by captain Austin Opara made life difficult for the visitors by keeping them at bay.

The victory has taken the Lagos-based team to 9th spot on the NPFL log with 26 points.