...the complete Nigerian football portal
Subscribe
Rivers United Have Positive News From The Treatment Room Ahead Showdown Vs Akwa Utd
Published: May 18, 2016 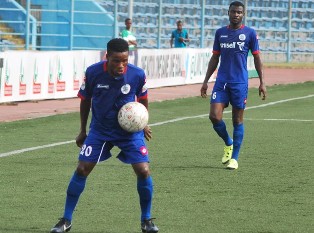 There is happier news to report from the sick bay as Ivorian marksman, Guy Kuemian looks set to make his first appearance since April 10 when he strained his left quadriceps in United’s 1-2 loss to Heartland at the Dan Anyiam Stadium, Owerri.

Big Ghanaian forward, Wilson Andoh is also back in full training after suffering a knee injury on April 24 in United’s 1-2 reverse against Plateau United at the Rwang Pam Stadium, Jos.

Star midfielder, Obomate Frederick missed out on United’s last game-a 0-1 loss to Abia Warriors in Umuahia- because of a slight foot injury but he returns for the big game on Wednesday.

Eguma is looking forward to Wednesday’s game with positive sentiments.

“That is the only way we can beat Akwa United.

“Playing at home makes no difference; we must work hard to win,” Eguma said.

So the stage is set, the war cry has been sounded and intense, fascinating football awaits in Port Harcourt.