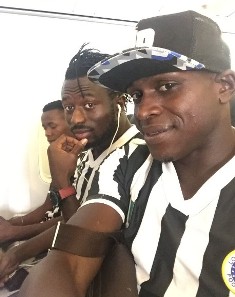 Kingsley Eduwo and Anthony Okpotu have been two of Lobi Stars’ most impressive performers this season but they miss out on Sunday’s NPFL fixture against Rivers United at the Aper Aku Stadium as they are both suspended.

Okpotu, Lobi’s main outlet for goals this term, says United should not be lulled into a false sense of security as a result of his absence.

“My teammates will miss me (on Sunday) but I am very confident in the players who will replace me and my strike partner, Eduwo.

“I believe the other strikers (who get selected to play) will step up to the plate.

“It hurts not to play in such an important game but there is nothing anyone can do now,” Okpotu told Rivers United Media.

Tony Okpotu has scored nine goals in the NPFL this term.