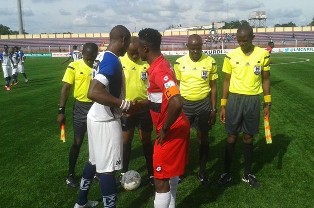 Moses Bunde handled in the box following a shot from Christian Weli but Okonkwo fired wildly from 12 yards to send the visiting supporters into fits of despair.

It was a dramatic end to a game that ebbed and flowed with the home side taking the fight to the visitors early on.

Just after the hour mark, Lobi was awarded a penalty after Gabriel Olalekan was adjudged to have handled in the box.

Akleche is a man with nerves of steel and he ruthlessly sent the hitherto peerless Rotimi the wrong way to send the home fans into raptures.

Two minutes after Akleche had put Lobi in front, the home side appeared to have pressed the self-destruct button as Solomon Kwambe received a second bookable offence after he kicked out at a sprawling Okonkwo.

United then proceeded to dominate possession and goal scoring opportunities, eventually winning a penalty at the death.