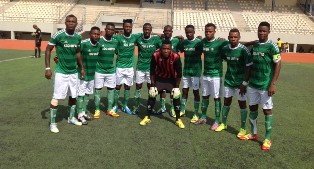 The Confluence state club on Wednesday in Benin, edged their Nationwide League opponent on penalties after one all in full time as goalkeeper Shola Sheshere saved two penalties for Kogi United.

The performance and victory for the Yahaya Bello Boys, according to Jatau, would set a good tone for his team as they get set to host newly promoted Shekarau Babes FC, Kano on Saturday in Week One of the NNL in Lokoja.

“First, I want to thank God Almighty that give us this victory, it wasn’t easy, but God crowned our effort with the victory as we were in control of the game throughout.

“We weren’t lucky to concede that goal, but thank God we didn’t lose focus and get back to equalize and thanks to the team for their efforts for this victory, ” Jatau begins.

“This victory means a lot for us as you know the league (NNL) is starting this weekend, we are confident that it will serve as a booster for us to go on to do well in our first game in Lokoja and the rest of the games, I think is the best way to start the season.

“Without deceiving myself, I believe we are ready (for the season to start), we will only continue to work towards getting better as the season goes on, there’s more understanding in the team now, when all hands are on deck, then what will continue to pray for is luck and victory which I believe God will give us,” the former Super Eagles striker said.

Echoing his coach, penalty hero, goalkeeper Shola Sheshere was excited about the Ekiti United’s victory noting that his team-mates have gotten better understanding which would gear them towards victory for Kogi United just as he believed the support of everyone is important for Confluence State club to perform creditable well this season.

“We are happy for this victory and happy for myself for penalties I saved, it means a lot to me and the team, we want to continue like this and we want all our fans, supporters and management to believe in us that we can deliver.

“If we work together and have the same passion and unity for Kogi United, and I believe this season will be ours with victories and good results.”

Kogi United will be taking on Shekarau Babes by 4pm in Lokoja on Saturday.