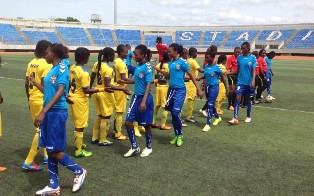 In what was a good afternoon for Confluence Queens, that saw them win 1-0 against Adamawa Queens in the match day two of the 2015/16 Nigeria Women Premier League on Saturday, one woman stood out from the rest - Ijeoma Emenike.

The lanky striker bagged the solitary goal before the interval for the Yahaya Bello Queens at the Confluence Stadium.

“First of all glory be to God for the injury free game. We won and increased our points to four,” the player fondly known by her admirers as Agali told Confluence Queens Media.

“I dedicate the goal to my family and fans of Confluence Queens.”

With one goal under her belt, Emenike opened her goal diary and the composure with which she tucked her finish beyond a fully stretched Chioma Nwankwo defies the fact this is her debut season for the Lokoja based outfit.

“I have been working hard in training and putting God first in everything that I do. I was expecting my first season with Confluence Queens to be good and I am happy that I have started scoring,” added Emenike.

“As a striker I always want to score goals but at times I miss some. I don’t get disappointed by those (that I miss) instead they motivate me to work harder and score more, ” she explained.

She earned her second start of the season in the match against Adamawa Queens.