...the complete Nigerian football portal
Subscribe
Adebayo Akinfenwa Signs Off In Style As AFC Wimbledon Earn Promotion To League One
Published: May 30, 2016 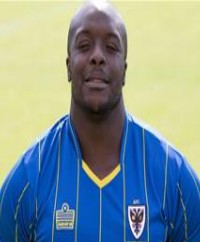 Adebayo Akinfenwa picked up his 42nd appearance of the season in all competitions as AFC Wimbledon beat Plymouth Argyle 2-0 in the Football League Two play-off final at Wembley on Monday.

The experienced striker replaced Tom Elliott in the 77th minute of the contest and made sure The Dons sealed their place in the third-tier next season by scoring a penalty kick thirteen minutes after his introduction.

Bayo had come close to giving AFC Wimbledon a two-goal advantage few minutes before his goal but was denied by goalkeeper Luke McCormick.

After a goalless first half, Lyle Taylor’s 78th minute strike had put Neal Ardley’s side in front.  AFC Wimbledon number 14 Adebayo Azeez made a came appearance in the closing minutes of the game.

Akinfenwa comes off contract with AFC Wimbledon in the summer and today’s game against Plymouth might be his last for the club he joined in 2014 from Gillingham.