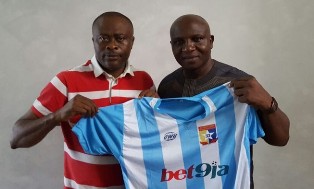 Nduka Ugbade will take over as the Technical Adviser of Remo Stars from the 2015/16 season.

Ugabade, who was the Flying Eagles assistant coach, has a wealth of experience as a footballer and also as a coach will be in charge of the team this season as Uche Okagube remains the Head Coach of the team.

Announcing the appointment, Kunle Soname said: “Nduka is quite simply one of the best coaches you can find around the country today.

“I would like to take this opportunity to welcome him to Remo Stars Football Club. His philosophy and track record is ideal to take the club forward.”

Nduka Ugbade said: “It’s a special honour for me to become the Technical Adviser of Remo Stars; it’s a club I felt an affinity for immediately I was approached for the job.

“I am very excited about the setup of the club which am quite impressed and already am feeling at home. The ambition of the club speaks volume and I also share the same ambition with the club.