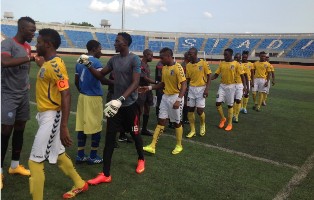 In-form goalkeeper, Shola Sheshere has claimed the first ever Kogi United Player of the Month Award following his heroics in the Round of 64 Federation Cup against Ekiti United.

Sheshere caught two penalties to help Kogi United edge the stubborn Nationwide League One side in a tension soaked match that was decided via penalties in Benin last Wednesday.

The giant shot-stopper beat both strikers John Jerome and Micheal Bolaji to the prize having scored 65 percent of the votes conducted among the officials of the club.

John Jerome- who scored the club’s lone goal against Shekarau Babes on Saturday- came second with 30% of the poll while new signing, Bolaji who has been a revelation under Coach Ishaya Jatau got 5 percent of the votes.

Kogi United will be taking on Mighty Jets in the Week Two of the new NNL season in Jos on Sayurday while the club is also having a date with Wikki Tourists of Bauchi in the Federation Cup Round of 32 later this month.