...the complete Nigerian football portal
Subscribe
Mountain of Fire and Miracles Set For Busy One Week Of Football
Published: June 04, 2016 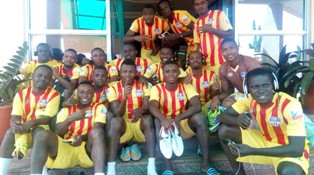 Mountain of Fire and Miracles Ministries Football Club of Lagos will begin the second stanza of the 2015/2016 Nigeria Professional Football League (NPFL) with two crucial games and the Federation Cup round 32 encounter.

The Olukoya Boys will be busy for the next one week as they set to continue their quest in the Nigerian top-flight.

MFM FC will host Nasarawa United Football Club of Lafia in match day 20 tie coming up on Wednesday at the Agege Township Stadium.

The team will travel to Port Harcourt next day to honour a week 21 Sunday’s NPFL game against Rivers United Football Club. Coach Fidelis Ilechukwu and his men will round off the busy one-week of football with the second round  of the 2016 National Challenge Cup match against Katsina United FC which is billed to hold on the 15th of June, 2016 at a yet to be disclosed venue. ‎