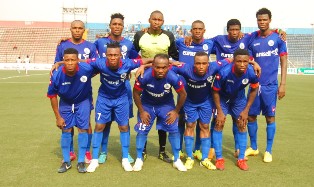 Weli headed home Chiwendu Ali’s corner kick for the game’s only goal past a despairing Lobi goal keeper, Okiemute Odah who had been in impressive form until that moment.

United enjoyed the better chances of a tight first half and could have been ahead as early as the third minute only for Odah to deny Bernard Ovoke from close range in the third minute.

Victor Alegbe almost gave the home side the lead on the stroke of half time but his tame effort failed to trouble the alert Odah in the Lobi goal.

United took the lead in deserved fashion from the ensuing corner through Weli, whose powerful header from point blank range left the impressive Odah embarrassed.

The win meant United stayed level on points with the leaders, Wikki Tourists who beat Ikorodu United 1-0 in Lagos to stay to on goals difference.