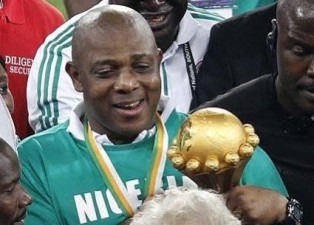 Keshi died in the early hours of Wednesday after complaining of irregular heartbeats and pain in his legs. He passed on before reaching the hospital.

Before the training session of his team this morning, Okon observed a minute silence with players and officials of the club in honour of the late gaffer.

In a chat with the club’s media, the former Super Falcons gaffer said the news came to him as a shock.

“It was a shocking news to me because I was quite close to him and when I heard the news this morning, I was demoralized.

“Before we started training this morning, I called the players to observe a minute silence for the great coach. It’s a very big loss to Nigerian coaches as well,” said Okon.