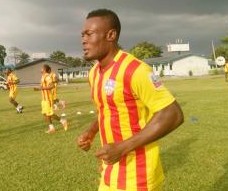 The Olukoya Boys defeated the host 2-1 in the reverse fixture at the Agege Township Stadium, Lagos courtesy of goals from Sikiru Olatunbosun and Ifeanyi Ifeanyi.

Uwaga who made his full NPFL debut against Ifeanyi Ubah Football Club of Nnewi says the encounter against coach Stanley Eguma’s men will be a difficult task owing to the homers recent run of good form in the league.

“Rivers United FC is one of the in-form teams in the league, although we beat them 2-1 in our first meeting but I feel their recent form is something to worry about really.

“If I’m not mistaken, they haven’t  lost a game at home this season and we have also picked points on the road even in difficult venues against more quality sides than Rivers United, so I believe we will return home with a decent result,” he toldmountaintopfc.com.

MFM FC currently occupy the seventh position on the top-flight log with 30 points, five points adrift the host who are third.