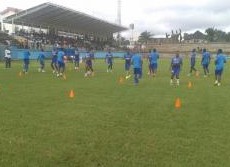 Goals in each half from Wasiu Jimoh and Ismaila Gata gave FC Ifeanyi Ubah (FCIU) a deserved 2-0 victory over Rivers United in the Nigeria Professional Football League (NPFL) on Sunday.

Jimoh finished off emphatically, right footed, into Sunday Rotimi’s bottom left hand corner after Maduabuchi Okereke opened up the Rivers United backline with some dare-devil piece of dribbling and impressive vision on 25 minutes.

Gata’s goal in the 52nd minute was as a result of an error by Rivers United midfielder, Yusuf Jaiyeola who lost the ball in midfield and the former Niger Tornadoes man showed no mercy as he fired clinically past Rotimi.

United were rocked just before kick off with the news that in form striker, Guy Kuemian had failed a late fitness test and would miss the game.

The Ivoirian who had scored four goals in his last two matches was replaced by Onyekachi Okafor who clearly failed to fill the void left by the former Leones Vegetarianos (Equatoguinean club) forward.

The ‘Pride of Rivers’ however started the stronger of the two sides and should have taken the lead inside the opening two minutes.

Chinonso Okonkwo was fouled at the edge of the FCIU penalty area and Bernard Ovoke who took the resultant free kick fired his effort narrowly wide.

That was the closest United came to scoring in a first half of very little quality until Okereke produced a moment of unadulterated magic in the 25th minute.

United looked a pale shadow of the side that dismantled Kaduna United in the Federation Cup in midweek and barely threatened the FCIU goalkeeper, Ikechuku Ezenwa all game.

Gata almost added a third goal late on for the hosts but watched in despair as his free kick sailed narrowly over.