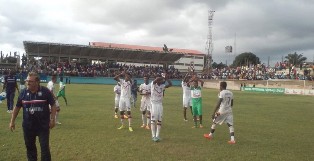 Ahead of the NPFL match day 24 fixture against 3SC of Ibadan at the Lekan Salami stadium, stand in skipper, Elu Wilson has said that the team will come all out to get the three points on Sunday.

Speaking after the team’s last training session ahead of Sunday’s game, Elu also disclosed that the players would love to improve their away record.

‘We are in a good frame of mind to play this match considering that we are just from winning our last two games.

‘However  looking at our recent away games, we have not really done well so we would be coming out tomorrow to rectify that.’

‘As for 3SC they’ve got a new coach, but we’ve got new players and a new mentality. We will be coming out smoking hot for tomorrow’s game.’

Another player who is very optimistic going into Sunday’s match is striker and new signing Wasiu Jimoh.

The striker who will be making a return to the Lekan Salami stadium after joining FC Ifeanyi Ubah from 3SC, says that he and his new team mates will approach tomorrow’s match with confidence.

‘ It’s going to be a very big match. We are going to go there, relax, play with confidence and determination.’