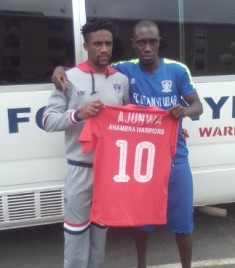 The players were unveiled Sunday afternoon at the team’s hotel in Ibadan ahead of the NPFL week 24 fixtures against 3SC.

Speaking at the short unveiling ceremony, stand in captain, Elu Wilson backed the new players to go on an be a success at the club.

“As you can see they are all experienced players and if you combine that to the quality of players we already have, then I think we all will make a huge impact and become successful with the club”

Also at the unveiling was team manager Jonathan Igwe who also was delighted with the new signings and believes that the new additions  will improve the results of the team.