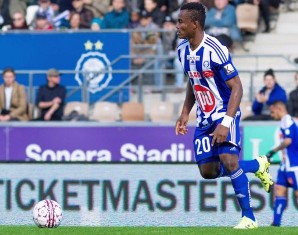 The hardworking midfielder Vincent Onovo is not in contention to play for HJK Helsinki in their UEFA Europa League First qualifying round, Game 1 against Atlantas in Lithuania on Thursday evening.

The winter acquisition from Inter Turku suffered an injury relapse after HJK’s goalless draw with KuPS on May 29 and might spend a minimum of two months on the sidelines as a result of the ailment.

“I didn’t travel with HJK to Lithuania, I suffered a ligament injury after the KuPS game in training, so bad but I will be back,” Onovo said to allnigeriasoccer.com.

“I am now in Sweden, I hope to start individual training two months from now. I hope we can get a win against Atlantas.”

Nigeria internationals Taye Taiwo and Nnamdi Oduamadi were in the traveling party to Lithuania, and are expected to get game time at the Central stadium of KlaipĂ„—da.