...the complete Nigerian football portal
Subscribe
Iwobi Links Up Well With Akpom As Arsenal Are Held By Lens In Friendly
Published: July 22, 2016 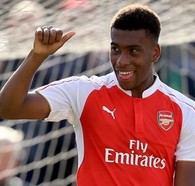 Nigerian duo Chuba Akpom and Alex Iwobi were named in the starting lineup as Arsenal began their pre-season programme by playing out a 1-1 draw with French club Lens at the Stade Bollaert-Delelis on Friday night.

The Super Eagles attacking midfielder was in action for 77 minutes while the England U21 international was replaced before the start of the second half.

There was link up play between the two Hale End Academy products pleasing to the eye in the opening 25 minutes, but it was the hosts that took the lead seven minutes before the end of the first half through Autret, who fired home from close range.

Oxlade-Chamberlain , who replaced Akpom, restored parity for the Gunners in the 82nd minute, scoring with a beautiful chip after he was set up by Gnabry.

Before their Premier League opener against Liverpool, Arsenal have lined up friendlies against MLS All-Stars, Guadalajara, Viking and Manchester City.