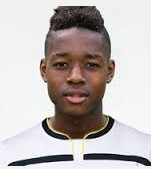 Having come off the bench against Juventus on Tuesday, the England U19 international was named in the starting XI against the Spanish opposition.

On ten minutes, Onomah would have given Tottenham Hotspur the lead, only for him to smash his effort against the crossbar.

Diego Godin finally broke the deadlock five minutes before the interval, scoring from close range after a free-kick was not cleared by the Spurs defense.

Josh Onomah was replaced by Nacer Chadli at half-time.