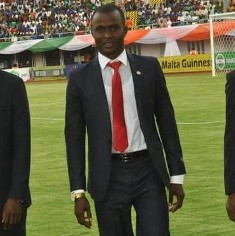 FIFA badged referee, Anietie Ferdinand Udoh will be at the center of events when Champions Enyimba FC of Aba host second placed Rangers International of Enugu, at the Yakubu Gowon Stadium, Port Harcourt, in one of eight matches billed for matchday 29 in the Nigerian Professional Football League.

The Akwa Ibom born referee has done four games in the current NPFL season, yet no homeside has won any of those games handled by him.

Ferdinand was in charge of the opening matchday fixture between Elkanemi Warriors of Maiduguri and Wikki Tourist of Bauchi, in Katsina, which the league leaders won by a lone goal.

He was also directed proceedings in the pulsating matchday six (2-2) draw between Abia Warriors and Rangers International, which Wydad Casablanca striker Chisom Chikatara’s 65th minute strike leveled terms for the Kennedy Boboye’s side at the Umuahia Township Stadium.

Ferdinand, who has officiated a couple of International games, as well as the CAF Champions League matches, also stood in between players of Lobi Stars and Wikki Tourist, at the Aper Aku Stadium. The game finished barren.

The matchday 19 fixture between Rangers International of Enugu and Heartland FC of Owerri, played at the Nnamdi Azikiwe Stadium, was yet another stunning day for the FIFA badged referee, who received a standing ovation from fans of both sides following his heroics on the night.

Ferdinand is unarguable one of the best hands within the African continent.

His presence on the field guarantees fairness and absolute professionalism, as well as encourage players bring our their best, in line with his apt jurisdiction of events.

Rangers are targeting a win against the two time African Champions, which ideally may see them dislodge  dislodge Wikki Tourist on top of the log, if the Bauchi side fail to win away to Akwa  United at the Godswill Akpabio International Stadium, Uyo.

On the other hand, Enyimba’s hopes of defending their title is hugely dependent on the outcome of the fixture against their oriental neighbours.

The Aba side could leapfrog Kano Pillars to 4th place, if they secure all three points in Port Harcourt, and Pillars fail to win in Nnewi.

Enyimba are fifth on the log with with 40 points, seven adrift of league leaders, Wikki Tourist, with two games in hand.

Can the People’s Elephant be the first team to win at home, in a game officiated by Ferdinand Anietie in the current campaign?