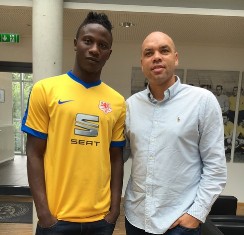 An MRI scan revealed on Saturday that he damaged the lateral meniscus tear in his right knee , and is set for a spell on the sidelines.

Worst case scenario, the ex-Flying Eagles striker will be out of action for three months, while medics have also estimated that he may resume full training in the next three weeks if he recovers more quickly.

Abdullahi has impressed in pre-season and was set to make his competitive debut for Eintracht Braunschweig this coming weekend in their 2 Bundesliga clash against Würzburger Kickers.

The 19-year-old ended his association with Viking in June by penning a four-year contract with The Lions.