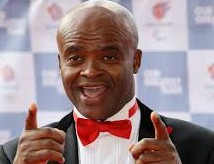 Chelsea defender Gary Cahill has been answering questions about the Olympic Games from the editors of the official website of the Premier League club.

Asked about his earliest Olympic memories, Cahill told chelseafc.com : “Kriss Akabusi winning a bronze medal in the hurdles in Barcelona in 1992. That was a great moment. ”

The West Ham fan was born in Paddington, London to Nigerian parents.