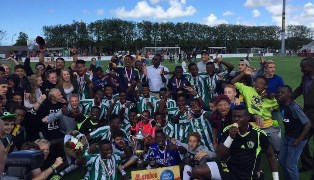 Dynamic Sporting Solutions midfielder Godwin Egbo has talked up a move to English Premier League club Chelsea and has admitted that ex-Blues star Frank Lampard is his hero.

The 18-year-old may be an unknown quantity in his homeland but recently made the back pages in Scandinavia after helping his Kaduna-based club win the Dana Cup by scoring four goals in nine appearances.

“I love Chelsea with all my heart because I like the way they play their football. My favourite player at the club was Lampard, ” said Egbo to allnigeriasoccer.com.

“I like him because he plays good football, he scores goals and he is a box-to-box midfielder. ”

Egbo says he picked up some valuable lessons representing his team at the Dana Cup and has thanked the proprietor of DSS Sunday Omotayo Adeleye for his support.

“I gained a lot playing in the tournament, I did very well and I played for my country. Winning the Cup is a thing of joy.

“We worked hard before going for the tournament and the hard work made us win it, and the grace of God showed us the way to it.

“I am so much proud to have a big boss like Sunny Omotayo, he has been a blessing to me and many more to come, ” he concluded.