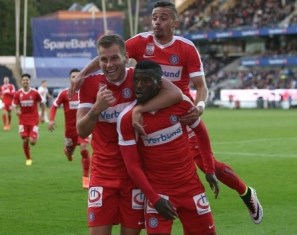 Austria Vienna striker Kayode Olanrewaju took to social media to celebrate his goal in the Europa League against
Rosenborg on Thursday night.

His goal in the 69th minute took his tally in this season’s competition to three goals (two assists), having bagged a brace in his team’s 4-1 rout of Kukesi in the second qualifying round.

“When your heart is pure...God has a way of blessing you...Thank you God for my super goal #Lk8,” said Kayode on Twitter.

To  qualify for the group stage of the Europa League, Austria Vienna saw off Kukësi, Spartak Trnava and Rosenborg in the qualifying rounds.

Kayode has played six games in the competition this term.