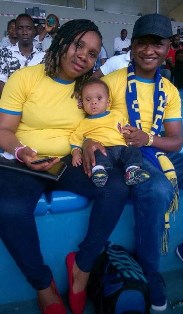 Warri Wolves Super fan, Eddy Iseri Ogbemudia, who doubles as the President of the Ordinary fans Assembly has promised to pay the the sum of 50,000 Naira to Wolves players if they survive relegation.

Ogbemudia on his Twitter handle disclosed that he will make the donation alongside his wife Mary Iseri Ogbemudia and their son, Malachi Ogheneruemu Iseri.

The ordinary fan further stated that he decided to support and motivate the players because government have failed to take care of their welfare.

He also called on league organiser to pay strict attention to welfare of players.

Ogbemudia promised to fly down to Warri to present the cheque to the players with his whole family at the end of the season.