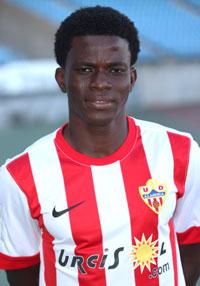 Nigeria international Ramon Azeez is in the best form of his life as shown by the two goals he has scored for Almeria after three rounds in the Spanish  Segunda División.

On Saturday, the defensive midfielder was on target in the 44th minute as Almeria thrashed  Rayo Vallecano 3-0 at the Estadio de los Juegos Mediterráneos, coming from behind to fire past Toño after he was teed up by Fidel.

Should the number eight register his name on the scoresheet in next weekend’s clash against Girona, he will better his single-season scoring record which he set during the 2013-2014 season in La Liga.

The former Flying Eagles star opened his account in the new season on the opening day against Cadiz, a crucial goal which earned Almeria a share of the spoils in a 1-1 draw.

Ramon Azeez completed his transfer to Almeria in the summer of 2011, and has remained at the Andalusian club since then.