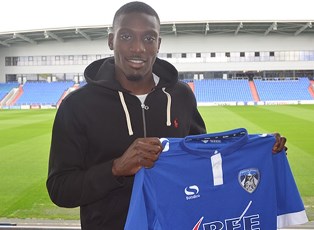 Former Flying Eagles invitee Freddie Ladapo has made his league debut for League One club Oldham Athletic where he will remain on loan until the start of the January transfer window.

The Crystal Palace loanee first made his competitive debut in the Latics 5-4 loss to Carlisle United in the Football League Trophy on August 30, before he made his first-ever appearance in the league for Oldham Athletic on Saturday.

Two minutes into added time at Boundary Park, Ladapo came close to an equalizer when his shot rebounded off the crossbar .

The 23-year-old Nigerian went the distance for the second game in a row for Oldham Athletic.

English-born Ladapo represented Colchester United, Woking and Margate before his switch to the Eagles in March 2016.